This is an ongoing project out in the shop.

First – a bit of the back story.

My 1975 standard beetle is a Fun Bug. Not a pretentious, fresh paint, new restoration kinda bug.  The goal is to always have some projects to work on, but never tie up the car for long in the good weather. Canadian summers are too short for that. You can appreciate the issues of having a Fun Bug in Canada – but sometimes it can be a rusty thing.

One of the to do items is to replace front beam. I managed to buy one at a swap meet last fall for a song.

I thought it might make for a nice winter project. Remove the beam from the car, move the parts to a new beam, reinstall front beam. Sounds easy right?  This year the Canadian winter seemed shorter than the Canadian summer. There were all kinds of projects to do, and not even all of them were car related (Ya I know – right!?). With spring almost around the corner, I needed to get to work – quickly!

My bug has been spending the winter in my father in-laws shop. Well cared for I may also add. I think my bug may have a toque and scarf now…. I don’t get there frequently, so rescuing parts and bringing them to my shop hasn’t happened very much.  In lieu of that, I have been able to secure a very rusty beam for parts. Despite the rust, I’ve been able to salvage control arms (upper and lower), torsion bars, spindles, a backing plate, steering box, hardware (nuts, bolts, camber tapers, brake adjusters). Obviously – some rusty old parts have no business being in a rebuilt front end. I ordered (from one of our sponsors – CIP1.ca) new ball joints, new shocks, tie-rods & ends, steering stabilizer and some bushings. Now I have a box full of new parts, not attached to my car, or even the front beam.

I want to rebuild the front end….once!  I don’t want to do that job again for that car, just maintenance where required. I’ve been very meticulous about cleaning each of the salvaged parts in the glass bead machine. Removing 43/44 years of rust has been a slow go on some parts. I have been able to remove the lower ball joints with a ball-joint c-clamp tool – but the control arms are pretty small and don’t have a lot of surface area to work against while pushing out the old parts. On the uppers, I sent them out to be done. I would recommend to send this to a garage or machine shop. 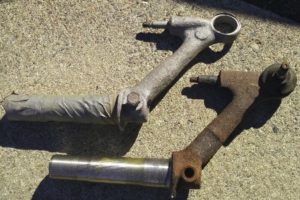 At this point I have two clean lower control arms, and the two uppers are still pretty rusty, three of the control arms without ball joints, but one of the lowers is complete with ball joint. I’ve yet to glass bead the spindles too, yikes.

I then spent some time working on wire brushing the front beam down to bare metal. This is was an easy, yet time consuming job as it is an aftermarket beam, so not too much rust on there. 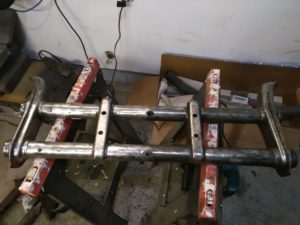 While wire brushing I noticed that there was a bracket that had been cut from the new-to-me beam. At first thought it was the towing/tie-down eye,  it wasn’t however.  It was the “stop” for the pitman arm – limiting the steering travel so the tires don’t catch on the body of the car. I figured in this front beams former life, it spent some time on a buggy or rail. I need that bracket back! I was able to cut the bracket from my rusty beam and do some test fits into position. 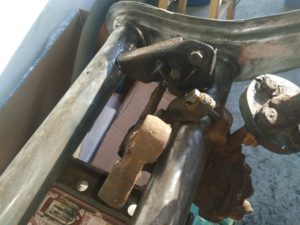 I was able to free up the adjustable stops with and chase all the threads with the tap & die.  Next steps will involve glass bead cabinet and some time with the MIG. I’ll take some pictures and share this when I get there.

The end goal is to protect the newly cleaned parts.  I think I will use POR-15 to paint and protect the beam/control arms. I think it seems like a good choice to protect as it should finish pretty hard. 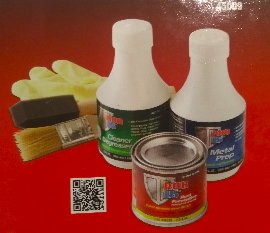 I will then top coat that with gloss black to protect a bit further. Supposedly the vapors from POR-15 are terrible, so I will need to work with the garage door open.  The minimum temperature for POR-15  is +10C – so I will need to wait three or four weeks yet.  I’ll let you know how that goes in an update post.

The good news is, it’s getting done, and should spring arrive early – I still have the vehicle completely intact. I can go enjoy some of those nice spring days!