Ever just wanted to know what bulbs to install in your late model Bug?

…or you were wondering about LED bulb versus conventional tungsten bulb brightness.

I put together this handy table with hopefully everything you ever wanted to know about your light bulbs.

Below are a few more notes about LED conversions for your Beetle and what you may wish to be aware of.

Regarding LED bulbs for your bug:  consider the consequences in certain locations.

Something as benign as an interior cabin lamp is a pretty simple substitution, but in other applications – some LED conversions may not work as you might expect. 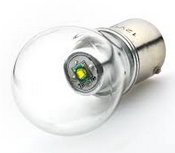 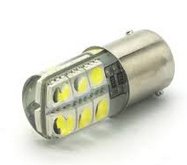 None of these bulbs will have the same illumination characteristics as a tungsten #1156 (or each other for that matter).  In a reverse lamp or license tag bulb, that may be ok.  However – if there is a semi-truck following your bug, and the driver of the truck mistakes your brake lamps for parking/clearance lamps…. not  a good situation.

I suppose the old adage is still true – “If it ain’t broke, don’t  fix it”

If anybody has done a full or partial LED swap on a bug, I’d like to know what bulbs you used, and any mods you had to do.  Leave a message in the comments below!