How I Chose a Motor Oil for My Classic/Collector Car

It is a certainty that every car I see at a cruise or car show is using some type of motor oil. Since becoming more interested in motor oils, I find the decision making process used by my peers, to be so very interesting. Some men have all their service and maintenance work performed by someone else and do not know the details of the oil used in their motors. At the other end of the spectrum are the very talented car guys that complete every bit of service on their cars including body work and paint. These later men, however, range all over the map with respect to their oil knowledge.

Let me share the process I used to choose a motor oil. First some background:

I own two early 60’s VW Beetles. These are air-cooled, small displacement, six volt engines in which engine heat is removed via transfer of heat from cooling fins to moving air as well as the transfer of heat from the oil to moving air. The cars are infrequently driven and the stock factory motor had no oil filter. The VW owners manual calls for 30W oil in summer and 20W in winter. I don’t drive the cars in the winter so only summer driving conditions are relevant.

Finding 30W oil was at first not that difficult, yet as modern engines evolved into users of multi-grade 0W-20, it was becoming harder to find. As I recall, only oil viscosity was a consideration when purchasing oil. I was ignorant about motor oil additives and their importance.

One day a local VW club member described the “zinc” issue to me. I did not understand the issue until I decided to complete some extensive research (mostly Internet) . Wow, what an eye opener!

My research also informed me that there were many oils claiming to be designed for classic cars but they rarely supported their claims with hard, factual numbers. Phrases such as “high zinc” were common yet the actual concentration (ppm) was absent from the label. I also found a “sub-industry” which produced “additives” that one could simply pour into motor oil and voila, significant protection against valve train wear was implied. When I learned about the process used in blending additive formulations during the motor oil creation process I knew that just dumping the contents of a small bottle into the oil filler spout of an engine and expecting it to protect my engine was “hope beyond hope”. For me “additives” were a non-starter.

I did find, during my Internet research, two motor oils that were conceived by car guys and manufactured by proper, modern, lubrication companies. I found it interesting that these two companies created the same product, but they did it independently, one in the USA and one in Canada.

The American company is Classic Car Motor Oil and the seed of the idea originated from the Indiana Region of the Classic Car Club of America. The oil blender is D-A Lubricant Company Inc., Lebanon, Indiana.

In Canada, the company is Collector Automobile Motor Oil Ltd. and the oil blender is BOSS Lubricants, Calgary, Alberta. Both of these companies sell an American Petroleum Institute certified, motor oil designed specifically for collector and classic cars, tractors and stationary engines (common element = flat tappet and infrequent use).

Many men, I have learned, use an oil in their classic ride, that was created for a different type of application. Diesel oil is commonly used in flat tappet engines. Racing oil is also frequently used in classic cars because it has “really” high zinc concentration. Some use fully synthetic oils and actually run the risk of increasing tappet wear due to reduced tappet rotation on account that the oil is too slippery; the tappets actually end up wearing faster.

Upon the conclusion of my research, I decided that the best oil to use in my cars was an oil designed and created specifically for my application; i.e. a custom blended specialty oil. Was I not asking for trouble by using an oil designed for another purpose, in my cars? 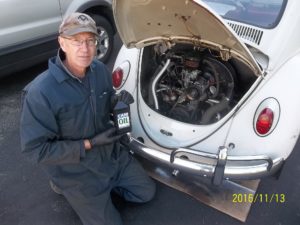 As a point of clarification, following completion of my oil research, I began immediately, to use the Canadian CAM Oil in my cars. In fact I was so pleased with the oil that I became the Ontario representative as I am located in Mississauga (Toronto), Ontario, Canada.

I am now very comfortable knowing I am using an oil suited exactly to my application.

Collector Automobile Motor Oil Ltd. is in no way affiliated with the US Classic Car Motor Oil