How do you start an engine that has no compression? 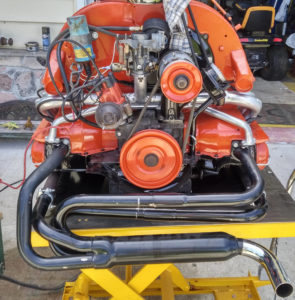 Intake, Compression, Ignition, Exhaust – that’s what four cycle internal combustion engines have been going for about the last 142 years.

But, what if you were missing one of those four steps – namely “compression”

This story goes back to last summer.  I bought another Bug. It’s a 1975 standard beetle. It’s been years since I’ve had my last one.  Since then, I’ve met and become involved with a number of people are passionate about the hobby of keeping these old VW’s going.

I needed to get this Bug running.  It was in a bit of a terrible state.  The motor hadn’t run for years.  If I understand the history of the car, perhaps more than 10 years.  Being a 1975, that means this engine was fuel injected.  It was formerly fuel injected, since a previous owner started an injection to carburetor conversion.   I liked the idea of maintaining the injection, but that ship had already sailed.  To be honest, getting an engine running that had sat for that long, a carburetor was the way to go.

Working with my friend Ernie, we did a basic check on the engine, to make sure that functionally it was intact.  After setting the valves, checking the timing and preparing a make-shift engine stand we attempted to start it.  Nothing happened.  Not a bump or a kick. Nothing.

We checked over the ignition system, and even swapped it completely to ensure we had a working ignition. We got ignition system to a point we were both happy with.

Another startup attempt and another failure.

This time, we plugged in the compression test gauge.  It registered mostly zero, on all four cylinders.  That’s pretty much impossible.

We surmised that since this was a former fuel-injected engine, it had fuel injected problems.  One of those issues is caused by lack of maintenance on the engine (oil changes), and the design of the closed loop emissions system.  Effectively the rings had stuck to the pistons and were not contacting the cylinder walls, resulting in blow-by.  This must have been the cause of the very low compression.

We figured we could bring the engine back to life, if only we could attain enough compression to get the engine to fire.  It’s a bit of a circular problem.  I suggested soaking down the cylinders with engine oil. Perhaps we could seal things up temporarily enough to get it to fire.  When we did that, it fired on two cylinders and a subsequent check with the compression tester says we were up to 20-PSI on 4 cylinders.

The next step was to pull out the plugs and fog down the cylinders with carburetor cleaner and let that soak for 15 or 20 minutes.  We modified a spray wand to spray in a 360 degree pattern to get the best effect.  After that soaked, we dumped the engine oil.  Nasty!   We refilled the engine with a bottle of Rislone and topped up the rest with Oil. Rislone is a temporary oil additive, which is likely often misused, but for this application was exactly what we wanted.  It has a cleaning component that breaks down the carbon in the engine.

Running the engine again yielded an easier start, and showed 60-70 PSI.  An improvement, but we were not there yet.   I didn’t have much time after this for a few weeks, but when I ran the next compression test (cold), I had 90-100 PSI.  At this point, I realized that this engine might actually live!  I was pretty happy about that.

I did another oil change, which again was pretty grisly, and added my final bottle of Rislone and topped up with 10W40.  I then put 3 or 4 hours on the motor.  The next compression test shows that I have 115 PSI (cold) on two of the four cylinders, and the other two cylinders leak compression unfortunately.

The motor starts and runs reliably, and it’s allowed me to have a bit of fun without spending a pile of money on an engine rebuild.    I think I will be doing something about the engine this summer. I’m thinking 87’s and dual carbs!