I hope everybody is doing well and is safe during these interesting times. Hopefully many of you are keeping busy working on projects around the house and of course, your VW’s!   I’m going to bring you a bit of a different VW restoration of sorts in a series. This VW doesn’t even take up any garage space and can be worked upon on the desk in your office! We’re going to do a restoration an original 1979 issue of a Tamiya Sand Scorcher!

In 1979, Tamiya Plastics Corporation released two 1/10 scale radio control cars. One was the Buggy Champ and the other was the Sand Scorcher.  They both share the majority of components, except one has a beetle body. Tamiya prided themselves on these being scaled down models of the real thing. Most of the suspension looks like it came from standard Volkswagen Beetle. In 2010, Tamiya re-released the Sand Scorcher with a few minor changes. Most notably was removing the bushing set and adding bearings. Also, due to copyright issues, the sticker set that comes with the 2010 model has fictitious sponsors instead of actual companies. Most notably is Autohaus has been replaced by Kolor Works

This is a link tune original late 1970s early 1980s sand scorcher promotional video. The music’s a bit cheesy, but fun to watch!

This particular scorcher was purchased in 1981 at the CNE in Toronto. It has been raced, jumped and generally used. The chassis, made out of fiberglass on the original, broke in half while running it on the street many years ago as teenagers. It was pretty funny when it snapped in half to see the front end of the Scorcher sitting there and the back end running down the street with the motor! . Being a kid money not being too much of an option, I made a new chassis using the two halves of the old chassis as a template and cut up an old road sign and painted it black. The scorcher ran a little slower, but never had a problem with the chassis again. To this day, the car is still on this chassis! 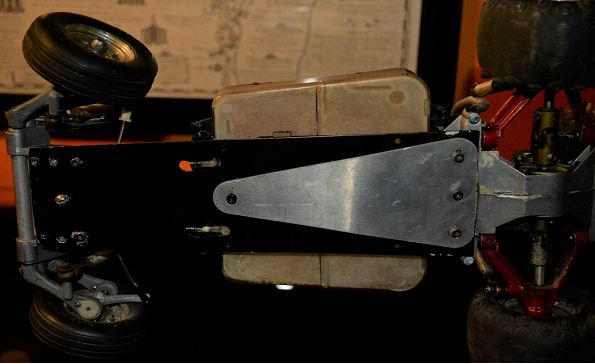 It’s in rough condition. The goal is not to have a perfectly restored car, but a sorted functioning one. I’ve looked for parts off and on over a period of few years, trying to stay with 1979 issue parts whenever possible. Either original or NOS. Some items can be very difficult to find, where 2010 re-issue parts will be used.

Next issue:  The Teardown!