I had the good fortune of finding a radio for my 1975 Bug during  a recent swap meet at John’s Bug Shop (a sponsor of our club).   It was a pretty cool period correct radio that I got for a real bargain.

It appears to be a Canadian Motorola model that has AM & FM (mono).  That was somewhat rare for that time period.  FM radio came to Canada in the mid-sixties, and FM Stereo broadcasts didn’t begin until the mid-seventies.  I remember where I grew up, FM stations were only beginning to come on the air in about 1977.  A FM radio in a VW Bug would have been a real rare item at that time, since the Beetle was an economy car.  I can’t find a date on it, but I seen similar US models dated  between 1970 – 1972.  I don’t really know what year it is, but that’s my best guess.

The radio wiring scheme is a little funny.  It’s a 12 Volt Negative ground setup with just a few wires.

It’s always fun to figure out by deduction how the radios were wired.

Antennas on cars don’t last forever.  Corrosion, vandalism,  and wear/tear all take a toll.  It was time to replace the antenna that had just worn out

I tested the radio on the bench and it worked great – time to get a new antenna!

I ordered VWC-251-035-503-ABK – ANTENNA WITH BLACK BASE -TOP OF BODY MOUNT – BEETLE 67-79 / TYPE 3 62-74 / VANAGON 80-92 from CIP1.ca which seems to be part of the Retro-Sound series of audio gear they offer.  It was a budget item, as the body mount is plastic, where the OE antennas were cast metal.  I didn’t have high expectations, but I wanted something that would be secure to the body, and pick up the local radio stations. 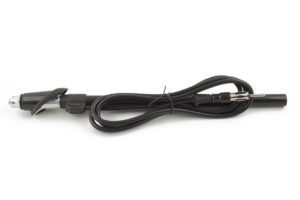 It arrived in my boxed shipment in a simple plastic sleeve.  I did some preparations to the bug and cleaned up a bit of rust scale around the old antenna and attached the new one.  I must say that the plastic mount concerned me, but it fastened tightly and the body gasket seemed to fit well as not not admit water inside the car.

As far as reception, it surpassed my expectation.  I suppose this is a result of both the radio and the antenna.  I’m in the Golden Horseshoe area of Ontario, Canada, so there is lots of radio, but this is every bit as good or better than my diversity antenna on my newer VW Golf.

I’m really quite pleased with the purchase, and would suggest if you need to replace your antenna on your bug – give this one a look.